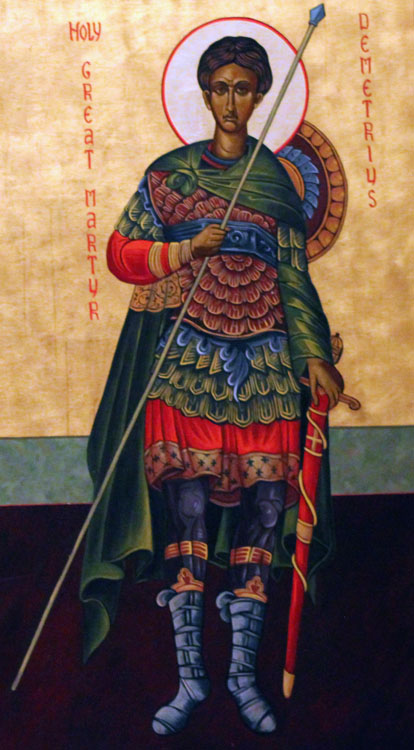 The Holy Great Martyr Theodore the Recruit (Tyro) was a soldier in the city of Alasium of the Pontine district (northeast province of Asia Minor, stretching along the coast of the Euxine, i.e. the Black Sea), under the command of a certain Brincus. They commanded him to offer sacrifice to idols. St Theodore firmly confessed his faith in Christ the Savior in a loud voice. The commander gave him several days to think it over, during which time St Theodore prayed.

They charged him with setting a pagan temple on fire, and threw him into prison to be starved to death. The Lord Jesus Christ appeared to him there, comforting and encouraging him. Brought to the governor, St Theodore boldly and fearlessly confessed his faith, for which he was subjected to new torments and condemned to burning. The martyr Theodore climbed onto the fire without hesitation, and with prayer and gave up his holy soul to God.

This occurred in about the year 306 under the Roman emperor Galerius (305-311). Unharmed by the fire, the body of St Theodore was buried in the city of Euchaita, not far from Amasium. His relics were afterwards transferred to Constantinople, to a church dedicated to him. His head is in Italy, in the city of Gaeto.

Later on, fifty years after the death of St Theodore, the emperor Julian the Apostate (361-363), wanting to commit an outrage upon the Christians, commanded the city-commander of Constantinople during the first week of Great Lent to sprinkle all the food provisions in the marketplaces with the blood offered to idols. St Theodore appeared in a dream to Archbishop Eudoxius, ordering him to inform all the Christians that no one should buy anything at the marketplaces, but rather to eat cooked wheat with honey (kolyva).

The Troparion to St Theodore is quite similar to the Troparion for the Prophet Daniel and the Three Holy Youths (December 17, Sunday Before Nativity). The Kontakion to St Theodore, who suffered martyrdom by fire, reminds us that he also had faith as his breastplate (see I Thessalonians 5:8).

We pray to St Theodore for the recovery of stolen articles.