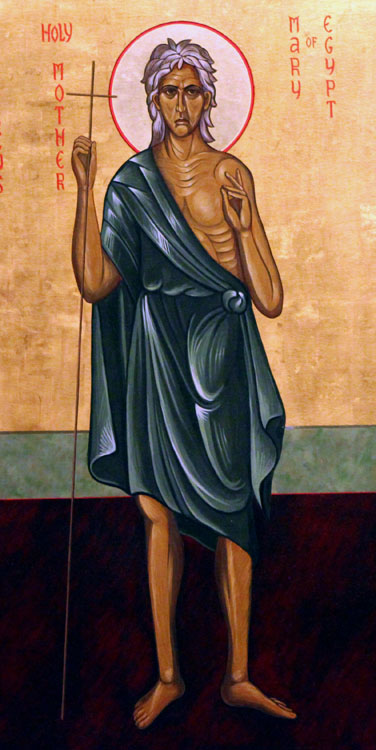 She ran away from her parents at age twelve and lived for seventeen years in Alexandria, working as a prostitute.  At the age of thirty-one, in the port of Alexandria, she embarked on a ship with pilgrims on their way to the Holy Land to celebrate the discovery of the Holy Cross, going along simply because she thought she could make easy money.  Once in Jerusalem, however, she wanted to visit the Holy Sepulcher, but a mysterious force held her back. She withdrew to the desert to meditate, repenting her sins and asking God to show her where she could live in penance.  A voice told her to cross the Jordan, and there, in the same desert where John the Baptist had lived (and where Jesus was baptized), she lived for forty-seven years, surviving, like the Baptist, on wild fruit.  Her story comes down to us from the monk Zosimus, who spent every Lent in the Jordanian desert, in seclusion and prayer.  There he met Mary of Egypt, who was disfigured from her hardships.  The penitent woman made him promise that on Holy Thursday of the following year, he would bring her Holy Communion.  Zosimus returned the following year, but the year after that he found the saint lying dead exactly where he had left her.  According to tradition, Zosimus buried Mary with the help of a lion.