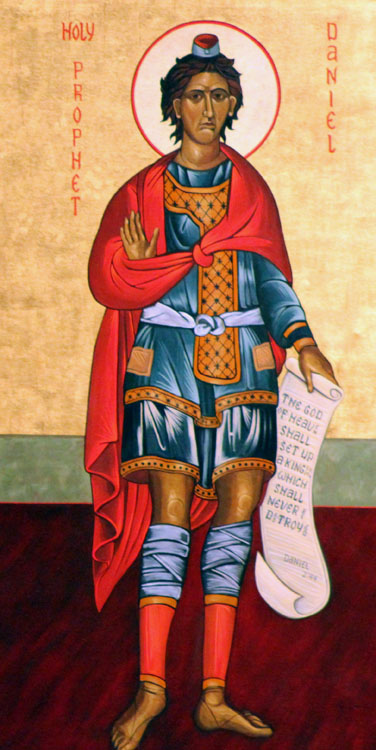 The Holy Prophet Daniel is the fourth of the major prophets.

In the years following 600 B.C. Jerusalem was conquered by the Babylonians, the Temple built by Solomon was destroyed, and many of the Israelite people were led away into the Babylonian Captivity. Among the captives were also the illustrious youths Daniel, Ananias, Azarias and Misael.

King Nebuchadnezzar of Babylon ordered that they be instructed in the Chaldean language and wisdom, and dressed them in finery. Handsome children of princely lineage were often chosen to serve as pages in the palace. For three years, they would be fed from food from the king's table. After this they would be allowed to stand before his throne. Daniel was renamed Baltasar, Ananias was called Shadrach, Misael was called Mishach, and Azarias was known as Abednego. But they, cleaving to their faith, disdained the extravagance of court, refusing to defile themselves by eating from the king's table and drinking his wine. Instead, they lived on vegetables and water.

The Lord granted them wisdom, and to St Daniel the gift of insight and the interpretation of dreams. The holy Prophet Daniel preserved his faith in the one God and trusted in His almighty help. He surpassed all the Chaldean astrologers and sorcerers in his wisdom, and was made a confidant to King Nebuchadnezzar.

Once, Nebuchadnezzar had a strange dream which terrified him (Daniel 2:1-6). He summoned magicians, sorcerers, and Chaldeans before him to interpret the dream. When they asked him what he had dreamt, the king refused to tell them. He said, "If you do not make known to me the dream and its interpretation, you shall be torn limb from limb, and your houses shall be laid in ruins." The Babylonian wise men protested that no magician or sorcerer could be expected to do this. Only the gods could reveal the dream and its meaning, they told him.

The king ordered all the wise men of Babylon to be executed. When they sought Daniel and his companions to put them to death, Daniel asked that the king's sentence not be carried out. He said that he could tell the king what he dreamt, for it had been revealed to him in a vision. Daniel was brought before the king and was able to reveal not only the content of the dream, but also its prophetic significance. After this, the king elevated Daniel to be ruler of the whole province of Babylon, and the chief of all the wise men.

During these times King Nebuchadnezzar ordered a huge statue to be made in his likeness. It was decreed that when people heard the sound of trumpets and other instruments, they should fall down and worship the golden idol. Because they refused to do this, the three holy youths Ananias, Azarias and Misael were cast into a fiery furnace. The flames shot out over the furnace forty-nine cubits, felling the Chaldeans standing about, but the holy youths walked in the midst of the flames, offering prayer and psalmody to the Lord (Daniel 3:26-90).

The Angel of the Lord appeared in the furnace and cooled the flames, and the young men remained unharmed. This "Angel of Great Counsel," as he is called in iconography, is identified with the Son of God (Daniel 3:25, Isaiah 9:6). In the first Canon for the Nativity of the Lord (Ode 5), the Church sings: "Thou hast sent us Thine Angel of Great Counsel." The emperor, upon seeing this, commanded them to come out, and was converted to the true God.

Under King Baltasar, St Daniel interpreted a mysterious inscription ("Mane, Thekel, Phares"), which had appeared on the wall of the palace during a banquet (Daniel 5:1-31), foretelling the downfall of the Babylonian kingdom. Under the Persian emperor Darius, St Daniel was slandered by his enemies, and was thrown into a den with hungry lions, but they did not touch him, and he was not harmed. The emperor Darius then rejoiced over Daniel and ordered people throughout his realm to worship the God of Daniel, "since He is the living and eternal God, and His Kingdom shall not be destroyed, and His dominion is forever" (Daniel 6:26).

The holy Prophet Daniel grieved deeply for his people, who then were undergoing righteous chastisement for a multitude of sins and offenses, for transgressing the laws of God, resulting in the grievous Babylonian Captivity and the destruction of Jerusalem: "My God, incline Thine ear and hearken; open Thine eyes and look upon our desolation and that of Thy city, in which Thy Name is spoken; for we do not make our supplication before Thee because of our own righteousness, but because of Thy great mercy" (Dan 9:18). Because of Daniel's righteous life and his prayers for the people's iniquity, the destiny of the nation of Israel and the fate of all the world was revealed to the holy prophet.

While interpreting the dream of King Nebuchadnezzar, the holy, glorious Prophet Daniel spoke of a great and final kingdom, the Kingdom of our Lord Jesus Christ (Dan 2:44). The prophetic vision about the seventy weeks (Dan 9:24-27) speaks about the signs of the First and the Second Comings of the Lord Jesus Christ, and is connected with those events (Daniel 12:1-12).

St Daniel interceded for his people before King Cyrus, who esteemed him highly, and who decreed freedom for the Israelite people. Daniel himself and his fellows Ananias, Azarias and Misael, all survived into old age, but died in captivity. According to the testimony of St Cyril of Alexandria (June 9), Sts Ananias, Azarias and Misael were beheaded on orders of the Persian emperor Chambyses.