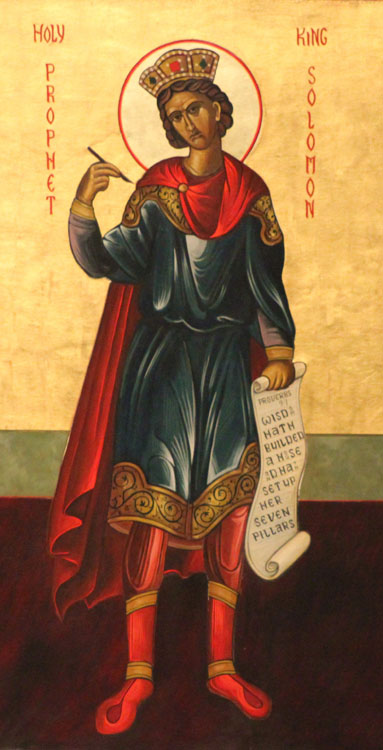 The biblical King Solomon was known for his wisdom, his wealth and his writings. Solomon was the son of King David and Bathsheba. Solomon was not the oldest son of David, but David promised Bathsheba that Solomon would be the next king. When David’s elder son Adonijah declared himself king, David ordered his servants to bring Solomon to the Gihon spring where the priest anointed him while David was still alive. Solomon inherited a considerable empire from his father.

Although he was a ruler at a young age, he soon became known for his wisdom. The first and most famous incident of his cleverness as a judge was when two women came to his court with a baby whom both women claimed as their own. Solomon threatened to split the baby in half. One woman was prepared to accept the decision, but the other begged the King to give the live baby to the other woman. Solomen then knew the second woman was the mother.

People from surrounding nations also came to hear Solomon’s wisdom. He composed 3,000 proverbs and 1,005 songs. He wrote the Song of Songs, the Book of Proverbs and Ecclesiastes.

Once Solomon’s empire was tranquil, he began to build the Holy Temple. He received wood from King Hiram of Tyre and imposed a compulsory labor service on both the Israelites and the foreign nations that were under his control. Solomon was also renowned for his other building projects in which he used slave labor from the Hittites, Amorites, Perizzites, Hivites and Jebusites. He spent 13 years building his own palace, and also built a city wall, a citadel called the Millo, a palace for the daughter of Pharaoh (who was one of his wives) and facilities for foreign traders. He erected cities for chariots and horsemen and created storage cities. He extended Jerusalem to the north and fortified cities near the mountains of Judah and Jerusalem.

Solomon’s downfall came in his old age. He had taken many foreign wives, whom he allowed to worship other gods. He even built shrines for the sacrifices of his foreign wives. Within Solomon’s kingdom, he placed heavy taxation on the people, who became bitter. He also had the people work as soldiers, chief officers and commanders of his chariots and cavalry. He granted special privileges to the tribes of Judah and this alienated the northern tribes. The prophet Ahijah of Shiloh prophesied that Jeroboam son of Nebat would become king over ten of the 12 tribes, instead of one of Solomon’s sons.

Solomon died in Jerusalem after 40 years as ruler of Israel. He was buried in the City of David. His son, Rehoboam succeeded him as king. Under Rehobaum’s rule, Solomon’s empire was lost and his kingdom was divided into two parts.