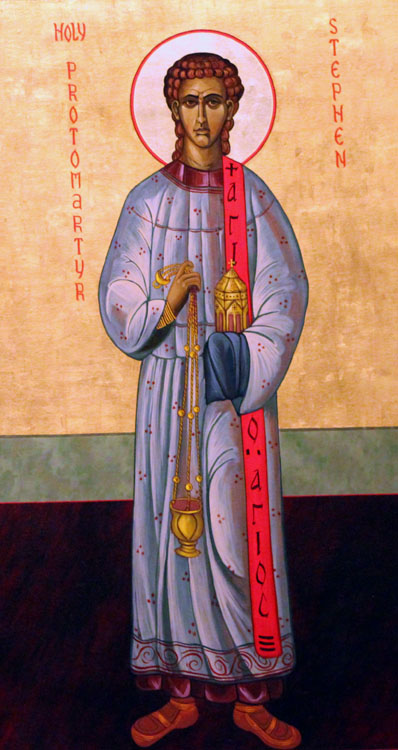 The Holy Protomartyr and Archdeacon Stephen was the eldest of the seven deacons, established by the Apostles themselves, and therefore he is called "archdeacon." He was the first Christian martyr, and he suffered for Christ at about age 30. In the words of Asterias, he was "the starting point of the martyrs, the instructor of suffering for Christ, the foundation of righteous confession, since Stephen was the first to shed his blood for the Gospel."

Filled with the Holy Spirit, St Stephen preached Christianity and defeated Jewish teachers of the Law in debate. The Jews maligned St Stephen, saying that he had uttered blasphemy against God and against Moses. St Stephen came before the Sanhedrin and the High Priest to answer these charges. He gave a fiery speech, in which he recounted the history of the Jewish nation, and denounced the Jews for persecuting the prophets, and also for executing the promised Messiah, Jesus Christ (Acts ch. 7).

During his speech, St Stephen suddenly saw the heavens opened and Jesus Christ standing at the right hand of God. The Jews shouted and covered their ears, and rushed at him. They dragged him out of the city and stoned him, but the holy martyr prayed for his murderers. Far off on the heights stood the Mother of God with the holy Apostle John the Theologian, and She prayed fervently for the martyr. Before his death St Stephen said, "Lord Jesus, receive my spirit. O Lord, lay not this sin to their charge." Then he joyfully gave up his pure soul to Christ.

The body of the holy Protomartyr Stephen, left to be eaten by beasts, was secretly taken up by the Jewish teacher Gamaliel and his son Habib, who buried Stephen on his estate. They both believed in Christ, and later receivedholy Baptism.